Republicans add more names to their 2022 Democrat hit list: GOP is now targeting 57 seats to win and takeover in the midterms

Republicans expanded their list of Democratic targets for next year’s election, a sign rowing confidence in their ability to retake control of the House of Representatives.

The GOP campaign arm announced 10 new House seats they have their eye on for the 2022 midterms, bringing their total target list to 57 seats.

All 10 new targets come from states that are losing a congressional seat in the redistricting process.

‘Republicans are on offense all across the country,’ said NRCC Chairman Tom Emmer in a statement.

Republicans need to pick up five seats in next year’s election to win control of the chamber, putting GOP Leader Kevin McCarthy in charge and removing Nancy Pelosi from the speaker’s chair. 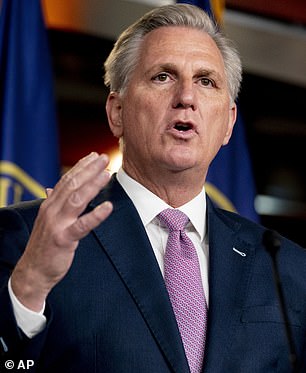 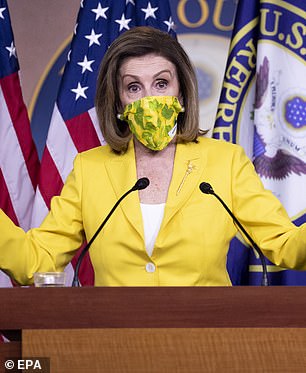 Republicans need to pick up five House seats in next year’s election to win control of the chamber, putting GOP Leader Kevin McCarthy in charge and removing Nancy Pelosi from the speaker’s chair

The GOP took it as an encouraging sign that two Republicans claimed both runoff spots in the special election for a House seat outside Fort Worth, Texas.

That district has been trending toward the blue: Donald Trump carried it by 12 points in 2016 but by only 3 points in 2020.

Tuesday’s new target announcement came a week after the U.S. Census Bureau presented their initial numbers and the states that will lose or gain House seats as a result of the once-in-a-decade redistricting process.

Under the new count, California, Illinois, Michigan, New York, Ohio, Pennsylvania and West Virginia will each lose a congressional seat.

Most political experts saw the changes benefiting Republicans although noted the final result wasn’t as bad for Democrats as early predictions saw.

The detailed data that will be used to redraw the lines won’t be released until this fall but the early numbers indicate Republicans ‘enter the upcoming mapping wars with a clear advantage,’ wrote David Wasserman, an expert on House elections for the Cook Political Report.

Republicans particularly benefited in Texas, Florida, Georgia and North Carolina – those five states alone could give them the seats they need to retake the House.

Democrats saw their majority in the House shrink to one of the smallest margins in decades after the 2020 election when 12 of their members fell to the GOP and every Republican incumbent held their seat. 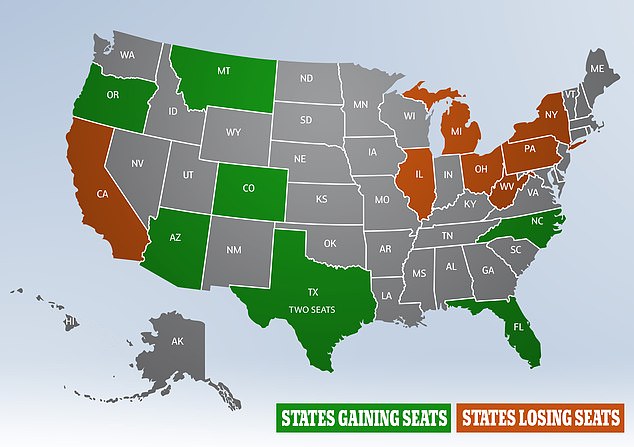